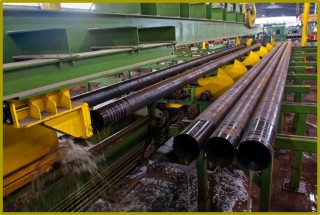 It has been a long time coming, but the steel market has finally started its descent out of the stratosphere.  During our last report, we discussed how Hot Rolled Coil had stubbornly held above $1,900 per ton.  November finally saw this inflection point breached and then some.  As of this Monday, HRC is below $1,800, with futures selling off rapidly.  The six-month curve has retreated to $1,363 today versus $1,436.75 a month ago.  Mill lead times have come down to six to eight weeks for some offers allowing buyers a chance to survey the market for the best available options as opposed to taking anything they can purchase.

Given the significant delta between the U.S. market and global markets, steel importers had consistently been able to price HRC $300-$400 per ton beneath the current domestic spot price while still securing attractive margins.  It will be interesting to monitor the import price and volume as the domestic market comes back to a more reasonable level.

Over the next year, some of the large factors that will be able to move markets are the following: new domestic mill capacity coming online in the first half of the year, automotive demand, and trade issues. The following additions have already started commissioning or will over the next twelve months: Arcelor Mittal/Nippon Steel Calvert (1.65 million), North Star BlueScope (900,000), Nucor Gallatin (1.4 million), and Steel Dynamics (3.0 million).  It should be noted however, significant capacity has been idled or permanently dismantled in the U.S. as part of long-term strategic moves by some industry players.  Q3 automotive capacity utilization was down to 63 percent due to chip shortages.  This shortage of vehicles manufactured could take years to make up and should provide ample demand through at least 2022 and into 2023.

Should the chip shortage be resolved, this could be a major factor in pricing stabilizing or returning to high levels.  While the Biden administration has sought to ease trade restrictions with strategic partners, this will struggle to be a major mover from a pricing standpoint if agreements follow similar outlines.  As illustrated by the deal with the European Union, climate change concerns play a major part in the agreement.

Due to the EU’s Carbon Border Adjustment Mechanism, any steel originating from the EU will have the cost of carbon attached as part of the export price. Traditionally, large quantities of exports from the EU to the US contained steel initially melted in Russia or Asian countries but processed in the EU.  It would make sense that these products will not make it to the U.S. at significant discounts to domestically made products.  If this important feature is attached to further trade discussions, it will prevent importers from significantly undercutting U.S. producers.

The pipe market has been lagging the overall steel market throughout 2021 and shows little sign, or desire, of catching up as prices in the base metals space subside.   Most lead times are, at a minimum, three to four months, but many mills have held back pricing to see if pricing will continue to move higher.  Shortages or even complete sell-outs, on critical items such as production casing and small OD line pipe, continue to drive the market.

Large import shipments are due to be imported during Q1, but much of this material is already pre-sold.  Given the lag from order of coil to delivery to the pipe mills (was up to twelve to sixteen weeks at times), domestic ERW mills will have struggled to start back up given the high cost of substrate.  Today’s spot price of coil should allow these mills to bring additional capacity online, but not until the start of the second quarter.  This production should help to fill in some of these inventory gaps, but this will most likely remain a seller’s market into the summer at a minimum.

Demand, which has still not returned to pre-Covid levels, continues to increase.  Since the start of the fourth quarter, operators have added an average of five rigs per week.  Each rig can consume around 500 tons of OCTG and 175 tons of line pipe per well.  This incremental 16-17k tons per month of demand has continued to outpace shipment growth, leading to a depletion or prime inventories in stocking yards.  This will most likely be exacerbated once November and December shipments finalize as they are typically low volume months for shipments, but steady on the consumption side.  Last Friday’s sudden drop in crude prices aside, (early sentiment indicates an overreaction, but that is outside our scope of expertise) should demand continue to increase operators will need to secure supplies for Q2 before the end of the year if they have plans of deploying additional rigs.